Reavers on the Seas of Fate – Session Summary 25 Posted

Twenty-fifth Session (8 page pdf) – “Return to Madness” – First, a bunch of goblins attacks our brave heroes’ genital regions.  Then, they sail back to Riddleport, where the re-dedication of the Riddleport Light is set to begin.  It’s into Black Dog’s caves and thence to the lighthouse!  But as you’d suspect, it’s not going to be that easy.  Thrill to this, the twenty-fifth session of our Pathfinder pirate campaign, Reavers on the Seas of Fate!

The “Junk-Kicker” tribe is from the Goodman Games/Wicked Fantasy Factory adventure Throwdown with the Arm-Ripper.  Strangely, in that adventure, they don’t actually kick anyone in the balls.  This is a significant oversight in my opinion, so I rectified it.  And a quick Google search for “goblins with big iron boots” got me this image I used for their chief, Krik Junk-Kick [pdf character sheet]: 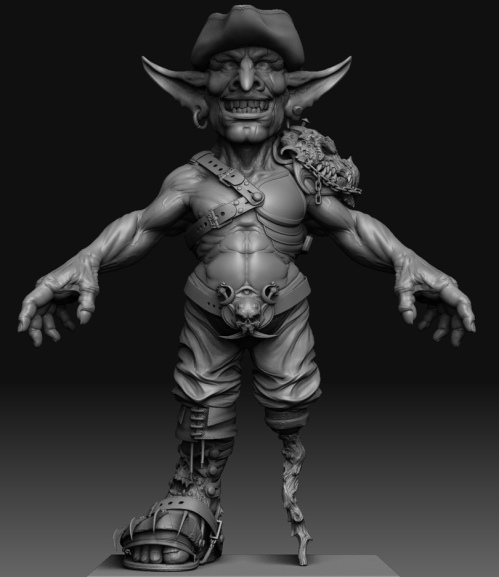 His tribe surrounded the PCs like the natives surrounded Indy in Raiders of the Lost Ark; then half of them shrieked fiercely and kicked the other half in the balls as a show of force.  This made a big impression on the PCs.  And their “junk-kicking” attack even has a simple in-game implementation, the new “Dirty Trick” maneuver from the new Advanced Player’s Guide!  Yay Pathfinder!

(Careful readers will note that I foreshadowed this with the story the two doppleganger “girls” told the PCs when they met them in the dungeon, that all the men of their village were too scared to fight the Junk-Kicker goblins so they had to go.)

You’d think 30 goblins would be a challenge, but I know my PCs.  Sure, they’re fourth level, but I had confidence that it would be a pretty easy fight.  The most dangerous part, really, was that one goblin tried to run off with Sindawe’s thrown magic spear during the battle.  Threaten their gear, that’ll get them motivated!  And this encounter threatened their gear in several different ways, if you get my meaning.

After that, they sailed back to Riddleport.  I did up some random encounters on the way there using some of the tables in the also-new GameMastery Guide, including the stranded “Heartbreak” Hinsin, who immediately started to compete with Jaren the Jinx for the favor of Hatshepsut.  She didn’t really groove on either one, but was more favorable towards Jaren.  Although there’s a little episode that didn’t get into the summary; Jaren and Hatshepsut went ashore in Roderick’s Cove and he put some moves on her and she didn’t like it; she went back to the ship upset and Sindawe tried to figure out what was wrong and comfort her, in his own somewhat clumsy way.

Then they get into Black Dog’s Caves!  More about that next time, but they fight a tojanida, which just about takes out Sindawe – Hatshepsut comes to his rescue and lifeguards him to shore – and then a dread allip comes for them.

It ended with them finding the fake treasure room.  The dialogue there isn’t made up; when Sindawe and Tommy scouted ahead and saw all those treasure chests, Sindawe immediately started shouting, “Don’t come in here!  We’re having gay sex!  Really gay sex!  We’ll be out in a while!”  Of course, that caused the rest of them to come running.