Reavers on the Seas of Fate – Season Three, Nineteenth Session 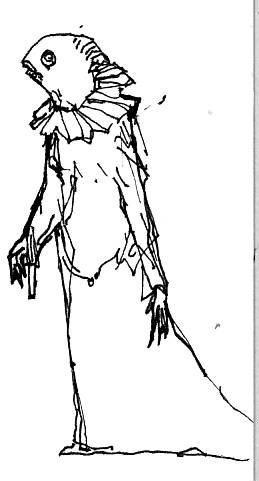 Nineteenth Session (10 page pdf) – “The Long Voyage Home” – The Teeth of Araska and captured Black Bunyip sail through the hazards of sunken Azlant. And a second chance encounter with the Fishwife ends up with a high body count.

First we get to  know the surviving crewmen of the Black Bunyip. Then we find out that JJ was built with a watertight internal cavity. Then Serpent weathers the wrath of Samaritha – she’s pregnant, but he doesn’t know that, so theories about why she’s acting psychotic range widely.

And then, they meet an old nemesis – the fishwife!  She lures sailors to their doom, and the squid she has dragging her ship around is no mean opponent either. A decent chunk of ship’s crew dies in the conflict, but most notably is the demise of Jaren the Jinx – allegedly at the hands of the squid but actually at the hands of Sindawe! He’s had it with that darn jinx-curse he bears (it turns all 1’s into critical fumbles). But you know why you never kill a cursed man, right? Every pirate knows that…

Finally, they make it out of the Azlanti islands into the cold northern waters! To get there you go along the trades to the south, but to get back to Avistan you have to come around far north to get the winds. More shipboard drama, next time!