Here’s the list of ENnie winners from ENWorld announced at Gen Con.  Let’s see how I did on my predictions… 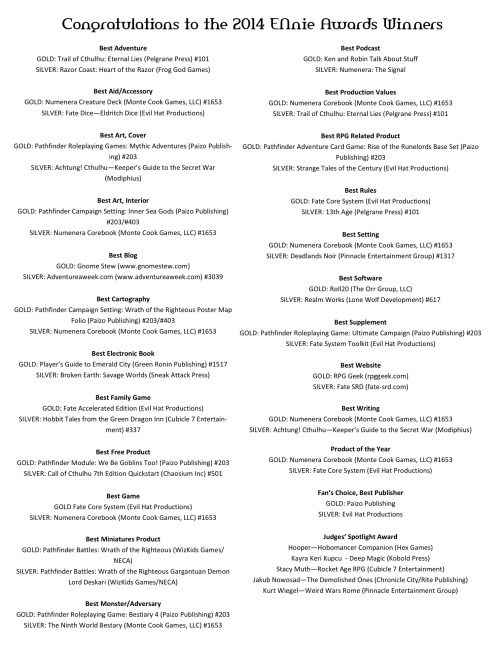 My Best Adventure pick, Razor Coast, got Silver. For Cover Art I had Mythic Adventures but then Razor Coast again, which got snubbed for Achtung Cthulhu. I had Numenera and Inner Sea Gods tied for Interior Art, they got Gold and Silver. I nailed the Best E-Book, Emerald City followed by Broken Earth. I got the order reversed on Best Free Product, We Be Goblins and CoC 7th. Best minis, Wrath of the Righteous (twice?), same on Best Monster/Adversary, Bestiary 4 and Ninth World Bestiary.

I picked Numenera for Best Production Values and Numenera as second for Setting (along with Razor Coast, which should have gotten more than one ENnie). Best Supplement – Ultimate Campaign, and I tagged Realm Works and roll20 for Best Software and FATE/Numenera for Product Of The Year. Of course Paizo gets fan favorite, that goes without saying.

So except for the categories where I deliberately didn’t pick, I was pretty darn accurate! I do think RC should have gotten a little more and Numenera a little less – I mean, there was a big buzz around it and yay, Monte Cook, but it’s one of those where I know a batch of people who own it, but no one who’s played it… But in any event, congrats to all the winners!

Like Loading...
This entry was posted in talk and tagged awards, ennies, RPG, RPGs. Bookmark the permalink.