All Those Lovely NPCs

In a recent comment on a Reavers session summary, flyboy1986 asked:

I’ve marvelled at how each of the crew seem to have a distinct personality (besides being murder-hobos). How do you keep track of everything??

Great question.  Thanks for noticing and I’m glad it comes through!  One of the things that I believe is the most important in an immersive RPG campaign is putting effort into well realized NPCs and bringing them to life.  I would venture to say it’s near impossible to put too much work into that aspect of a campaign.  In our Reavers game, besides the usual crop of villains and lovers and whatnot, they have a crew of over 60 people on their pirate ship.

Some people would have you “abstract that out.” Those people suck. Think about well done movies/TV shows.  They have even minor characters be memorable – even people you don’t hear their names.  To take a naval example, movies like Pirates of the Caribbean or Master and Commander, you feel like you recognize and know a little bit about random ship crew – there’s the ones that get more play than others (the two guys who were soldiers and became pirates in Pirates, the old Hold Fast guy in Master) but the more you see some random swab and remember them and think “oh yeah that’s the flute playing guy” the more realistic a world you get.  And realism of your game world is the table stakes for player investment in the world and NPCs.

Now, I don’t rely on tooling for much of it – here’s the actual documented list of crew on the Teeth of Araska:

Araska Pirates (all have gunnery, a silver plated weapon, and a clw potion)

Bunyip Crew (gunners have 1 less rank in Stealth; all have 1d6 SA, 2d6 if flanking with each other)

That’s it. 61 people (including the PCs).  A hefty challenge – but heck, I need to push my own abilities while GMing to get better! 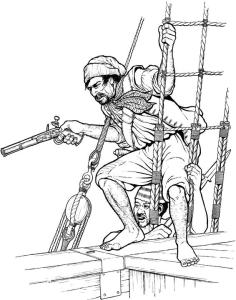 Of course all 61 of them didn’t just airdrop in one day. This campaign’s 6 years in. So what I do is, when they’re introduced, try to make sure and include something interesting about each one.  The first crewman they ever met was Thalios Dondrel, son of Mordekai, and besides his name he was butt naked on a ghost ship when they met him, and he speaks in a super-piratey accent all the time. When they met him again much later, they remembered him.

The ex-Chelaxian slaves they rescued, settled on an island, and later went back to recruit as pirates – there was an illustration in the module of Bel, Pirro, and Sevgi. Bel was bald and heavy so I decided he was a eunuch, and he and Sevgi had this weird relationship that then made him really want to go to Druid Witch Regeneration Island to get his gear regrown.  Having actual goals other than “serve the PCs” adds realism and thus 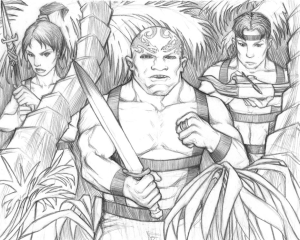 remembrance. Pirro was human but the PCs kept thinking he was half elf from his picture. Some people say “always go with what the PCs say!” but you have to mix it up – often it’s great to grab onto something the PCs say and add it to the NPC, but in this case I contravened that by saying “nope, human!” so they decided he was pretty metrosexual.

Mix it up.  There’s a handful of crew I use voices for (I don’t use voices for everyone, but JJ the perverted seamunculus gets a Gilbert Gottfried voice), a handful I use body language for (Lavender Lil most notably), others with specific habits (like Slasher Jim the serial killer or Stoke who is kinda deaf and talks loud). Some I’ve got a good picture for that I use, too – just Google it up, or rip pics from gaming PDFs (or even take cell phone pics from print ones). There’s Big Mike and Little Mike, whose names and dynamic I stole from two old gaming buddies I had in Memphis.  A NPC from Nidal has different flavor from a NPC from the Sun Temple Colony in sunken Azlant, or an ex-Chelish military recruit, or an escaped slave. Remember that different players remember things differently – they may be a more visual person or may like Cheliax a lot or whatever, so they’ll glom onto some things another player doesn’t.

And then there’s just incidents of luck.  I roll randomly when they’re in port to see what good and bad things happen, and once one guy gets robbed by a bunch of hookers that becomes part of his character. There’ll be a fight at sea on the ship and I’ll roll some dice and determine that Tanned Hank rushes a monster while others are hanging back, and suddenly the PCs are like “that guy’s crazy, which normally would be good but he’s our only carpenter so we really need to manage protecting him better…”

Then once there’s anything memorable about a character – you double down on it.  Whenever that NPC is involved in something – maybe it has to do with that.  Oh that pirate’s a junkie, so if some random encounter happens to her it is while she’s trying to buy drugs.  A little reinforcement goes a long way. Wogan accidentally said something to Klangin the orc when they found her, so now she’s continually pursuing him romantically (as is the meek Desnan, Rucia), so the chaste cleric is in a weird love triangle.  It makes the NPCs vivid to him and the rest of the PCs (since egging them on has a lot of entertainment value).  I try to never say “a crewman says X.”  It’s always someone specific. I roll 1d61 (computers, it’s easy) and when it tells me Dum-Dum is the crewman on watch, and then I roll a Perception check to notice another ship and he botches it, the PCs are like “Well… He isn’t the brightest, I mean, it’s right there in his name, you can’t really blame him that much.” In the real world, people start interpreting input to reinforce preexisting assumptions they have about people.  This is problematic in the real world but it’s your friend as a GM.

You’ll notice I don’t have much of that written down in the crew list.  It’s in session summaries, but in general when done right people just remember. If it has to be written down, it’s already unsuccessful.

Sometimes I wish I had a more rich relationship mapping tool, and have considered a bit more of a morale/mutiny kind of system – but more tracking or mechanics isn’t strictly needed.  I’ll have one of the PCs make a Diplomacy check if I think the crew’s opinion is at stake over something to see how they take it.

And besides that – just give NPCs some initiative.  I mean, I’ve played in so many games where all the NPCs just sit there like it’s World of fucking Warcraft waiting for PCs to ‘activate’ them.  My PCs know if they leave their pirates around for too long unsupervised they’re going to definitely try to steal, snort, screw, or deface something.  They’re pirates!!!  And they get ideas of their own. Like when they were on Firewatch Island and went on shore considering looting the local monastery.  The PCs found out about zombie attacks and called a boat over from the ship, with a monk in attendance.  They told the crewmen “tonight, there may be a zombie attack…” in kind of a weird leading way.  So the pirates decided that was their captain trying to subtly communicate to them, and rowed back that evening dressed and made up like zombies to “attack the monastery.”  The PCs weren’t sure whether to crack up, be upset, or be impressed with their plan.  NPCs run off, they get married, they drown in a ditch when drunk. They’ve got their own agendas and ideas, they’re racist against elves or are kinda OCD about stuff or are always talking about the inn they’ll buy when they retire rich.  Just take some random thing that comes to mind from a real person or a book/TV/movie character or whatnot from the last week and stick it onto an NPC and watch it grow.

And it pays off.  A number of times they’ve had some random crew member – and not one of the main ones – get into a fix to where I kinda assume they’ll just sail on and let them rot in jail or be kidnapped by a rich pervert or whatever.  But they absolutely don’t, and go out of their way and to great expense and/or danger to rescue them, even if it’s objectively deserved and/or their fault. They’ve invested thousands of gold in magic items into their crew. They trust some, distrust others, enjoy the company of some, not so much of others…  All of the ingredients required to be realistic and memorable.

Like Loading...
This entry was posted in talk and tagged characterization, NPCs, RPG, RPGs. Bookmark the permalink.

3 responses to “All Those Lovely NPCs”