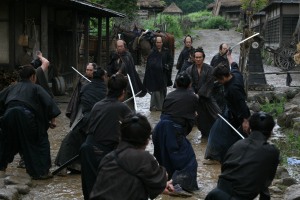 First we head out to the lodge and get the “Nine Pawns,” a bunch of ronin, to go hold off the mass of the daimyo’s retainers while we bust in on him and his elite bodyguard. Despite our attempt at stealthily infiltrating the onsen, they bum rush us. You know, when you have six characters all of which have to roll Stealth or else you’re detected, you may as well not bother rolling; the laws of probability indicate someone’s going to bork the roll.

Then we fight our way through a bunch of tengu samurai and normal samurai with some snappy tactics. They got us in a pincer. Gobo and Jacob got caught on the end of the left flank and I figured our little blind gnome oracle was toast, but he has a nice sparkly 30 AC from his magics so he tanked better than the rest of us. I protected Harwynian and shot the samurai up while he fended them off with a Forceful Hand and crowd control including a Persistent Slow. V’lk cast an illusion of the Nine Pawns and that kept the right flank partially protected for a long time. Gobo got a little lucky, but we really clicked tactically and did a great job IMHO. 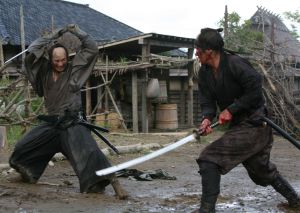 And finally I got to duel the Daimyo, glass cannon on glass cannon. I almost murderized him in one round (only his samurai resolve saved him – in fact, the GM thought he was dead outright until he realized he was looking at the wrong guy’s hp total), and a dragon breath from Jacob finished him off. His plump ogre mage buddy wasn’t much work. Then it’s all over but the looting.  We even raised the two dead Nine Pawns and gave them all magical katanas.