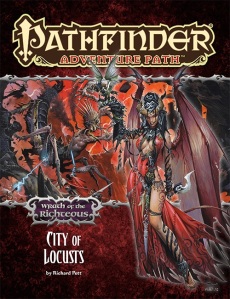 We power through to the last chapter of Wrath of the Righteous Adventure Path, brought to its conclusion as we beard Deskari himself in City of Locusts.

Apologies – as we got to the end of this AP we had several sessions where summaries weren’t taken, so there’s gaps between each.  I’ll try to fill in where I can.

First Session (7 page pdf) – A mess of locust demons attack Drezen, so we go to the Abyss (again) to go kill their general, Aponavicus the marilith. Blade barriers are so much fun. Then we find out Areelu Vorlesh is trying to absorb Drezen into the Rasping Rifts!  Guess who needs to die now?

Apparently between these two sessions we talked with Nocticula and got sent to a brothel in the Abyss? There’s not a missing summary, must just be an early departure/late arrival missing part of 1 or 2.

Second Session (11 page pdf) – In an Abyssal brothel called the Yearning House, we fight Sister Perversion, her succubi, and simulacra of ourselves they like having sex with. Then we fight her drider boss. Then to the Foundry to find some demon who’s the key to it all, and get to fight a dracolich version of Terendelev. A True Rez and look we have a dragon!

Third Session (missing) – The characters invaded the Soul Foundry and grabbed the Suture, a crippled anti-mythic aura demon. At that point Korramzadeh the Storm King showed up and the city of Iz started to vanish into the Pit. The characters slew the Storm King and celebrated their victory as they escaped from the crumbling city.

Fourth Session (10 page pdf) – Time to close the Worldwound for good!  So we kill, that being the answer to all problems.  We kill some wormy dragon riders, kill some demons, kill Diurgus the Brood Lord, kill locust-dudes…

Fifth Session (8 page pdf) – We kill some giant maggots, a devastator, the Favored of Deskari, some demented aeons… Actually, we heal the aeons. Then we kill some demons and free an inevitable. I personally kill a mythic quasit in a gimp mask.  The Abyss gets goofier all the time.

Sixth Session (9 page pdf) – We confront the witch Areelu Vorlesh, in order to slay her and then to close the Worldwound for good! We also get an undead Storm King, a hundred-handed titan, an avatar of Deskari, and more in the bargain. No worries for mythic murderhobos, and we close the rift – but then we get tossed into a landscape with Deskari the demon lord himself!  All that remains is blood and vengeance in the climax of this AP!