After our Wrath of the Righteous campaign, we needed about nine months of palate-cleansing one-shots. We like Pathfinder still and I’m running Reavers still under PF but it’s a lot of law/math for the fun, so we decided our next campaign would be the Pathfinder Adventure Path Mummy’s Mask – but using the Dungeon World rules! 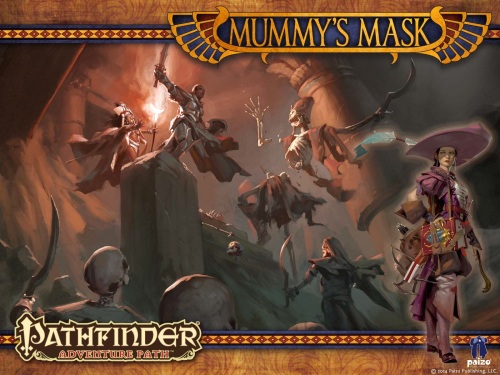 We’ve played Dungeon World and some other “Powered by the Apocalypse” games like Monster of the Week.  We’re mildly concerned about whether it’s too simple for a long campaign – sometimes the same list of 3 things that goes wrong with every 7-9 roll can become trying on the GM and players’ patience – but the attributes of being fiction-first, player-driven, and rules-light attracts us.  So today, Paul started it!

We’ll have the usual session summaries; the first isn’t ready yet though, but I thought I’d give you all a teaser. I’m playing Khaled the Keleshite burglar – I immediately thought “hey I want to play one of the classes that always sucks playing in Pathfinder,” which put rogue and blaster wizard at the top of my list. But we for sure needed a rogue so I went that way.

Patrick is playing Usif bin Adeen, the Osirian Immolator (fire guy); Tim is playing the ifrit (efreet-heritage race) cleric Denat, and Chris is playing Murdus the Osirian fighter. It’s a lively bunch. Usif is part of some weird fire cult.  Denat is a cleric of Thisamet, and his cries of “Food for the Food God!” cast fear into the hearts of our enemies.  (Well, in theory; most of our enemies have been bugs and stuff so far.)  Murdus is convinced he’s the reincarnation of Hetshepsu, one of the Pharaohs of Ascension.  Khaled is kind of the odd man out – unlike the other three he’s Keleshite (fantasy Arab) instead of Osirian (fantasy Egyptian), not particularly religious or weird, he just wants to make a big score and live the easy life. More of an Aladdin meets Assassins’ Creed kind of guy. But since he’s a professional, and reasonably charming, the other three like him. We named our group the Mummy Rustlers (you need a group name to sign up to loot tombs in Wati).

We are working on looting a tomb, but the inter-party interaction and stuff going on in Wati itself is just as entertaining.  Murdus’ sister is also convinced she’s a reincarnated Pharaoh and is messing with us; Khaled is trying to seduce the purple-hatted Taldan noblewoman who runs one of the other teams…  Join us for our adventures looting the Necropolis of Wati in Mummy Rustlers!

Fifth Session (10 page pdf) – We ascend Gallowspire and it’s a fight to the finish with a would-be successor to the Whispering Tyrant!

Welcome to the final session of our Carrion Crown campaign! It lasted for exactly a year of every-other-weekend play. We’re level 14 and locked, cocked, and ready to rock.

We have some luck and an optimized necromancer – the one fight on the way up the tower that could have been epic and/or fatal was the nightwing, and Zurak banished it at a go. We did a good job at not hesitating to use our spells as we went up but also not depleting ourselves completely.

Then we threw down with the lich!  Well, an amped up semi lich dude. But the “solo caster vs party of PCs” fight never lasts too long, we lay on greater dispel magics and swarm him.

You can see our final L14 character builds (for some of us, at least) on the main Carrion Crown page! I’ll publish a retrospective with thoughts from the players and GM later.

Fourth Session (15 page pdf) – Dr. Vaus turns into his alter ego Ironface and head butts the Grey Friar till they both regret it. Then, shopping! And then we meet the most helpful ghasts in the world. And then we fight fight fight.

First, Bruce our session scribe treats you to an extended bout of more-purple-than-usual prose. I missed the Grey Friar fight because I was taking my daughter to band camp, but I got there in time for the shopping!

We went to Gallowspire and fought the ravener first.  That’s like a dracolich but not copyrighted, apparently. I liked the end scene where I gently send him to his rest courtesy of my (Su) Healing Hex.

Then we had one of those shitty D&D fights, with “dreams” that look and act all undead but aren’t because they know we have anti-undead stuff going on, and they spam fear and confusion and such on us all combat.  Yay, I got to spend the whole combat running away. That’s one game mechanic that needs to die in a fire, it is so un-fun.

Then we rested.  Then we fought two devourers and a nightshade, and went to rest again.  I summoned a celestial triceratops again but to make it more Indian-y I insisted it was an ancient psychic tandem war elephant (see pic above!).  Dr. Vaus’ force bombs are the one thing that actually allows us to dump damage onto anything in this craphole.

I’m not too jazzed with this final chapter, but next time should be the climax!

Third Session (14 page pdf) – As we wander through Renchurch, our necromancer and dirge bard keep us in lively discussion with the local undeads. And we do bong hits with Whispering Way acolytes. (No, really!)

The Worm That Walks

Apparently there’s nothing you can’t add the lich template to, including werewolves and worms. The grind would be a bit trying, but with all the charmed undead we have around, we at least get to talk some before the killing.  When we came across Whispering Way acolytes smoking spirit siphons, Girl was so put out by the dungeon that she flopped down and started taking hits with them. This was quite successful, as we talked with them for a long while and then moved on.

When we fought a bunch of “cenobites” it took us a long, long time to get through our heads that wasn’t code for Hellraiser type cenobites (which you see a lot in Pathfinder, they’re called kytons) but actual, you know, monk type cenobites. But undead, so whatever.

Then it was double up action with the Worm that Walks and the wolf-lich. Spells! Violence!

Second Session (11 page pdf) – We force our way into the monastery and fight various high level outsiders. Then we try to act chill when we meet our vampire lady friend.

Devils, daemons, undead, we’re racking up the CRs here. Then we find our vampire lady friend parleying with the locals. We collaborate with her and then waste some spectres. It’s mostly fight, read the session summary for the nitty gritty!

Along the way, Xurak does his best to provoke a group TPK by summoning a demon while everyone’s asleep. Some very lucky rolls on a spell combo from me and crit from Oswald puts paid to that, however.

Then we about get burned to death in a barrow.  But eventually we get to Renchurch!  There’s a banshee on the wall, but Zurak charms her too. We start to go in, and get attacked by an athach and an unseen sniper. Storm the beaches!!! 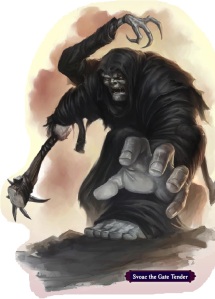 Fourth Session (14 page pdf) – We kill vampire witches and blood knights, and then almost get killed by angry plant life. Then, it’s off to Renchurch!

We find a corrupted vampire paladin and get intel from him. This allows us to bust in on the vampire witch and blood knight from the side instead of the front. Xurak dispels her solid fog, Nigel hits her with hold person (he’s a dirge bard so it works on undeads), and I power-slide over and stake her! We sic a hasted zombie octopus on the blood knight and it’s like Tokyo Gore Police up in this bitch.

That was easy! We go back to Caliphas and drink. Then it’s off to the Church of All Renfields – where a bunch of hangman trees just about murder us. It’s always the nuisance encounters that cause us to wipe in these games.

After I leave, the group decides to tease an irate linnorm, and end up teleporting away to avoid becoming linnorm droppings.

Third Session (12 page pdf) – Off to the Monastery of Saint Lemiran, where all the witches are strong, all the vampires are good looking, and all the loot drops are above average.

We semi-quietly infiltrate the Monastery of St. Lemiran with our pet charmed vampire, clear some guards, and hit one of the two witches that run the place.  As usual, I drop her with a slumber hex but she gets woken up by others before she can get coup de graced, alas.

We finish off with a demonic stablehand, and prepare to clear the next level in a fortnight!

Basically this is one big fight.  Xurak charms the main vamp, but we fight the others till we manage to lock them in a bathroom and tear the roof off to poof them. Then there’s some ghouls and demons. I turn a demon into a slug with baleful polymorph, learning my lesson from last time (when I turned a monster into a little crab and it killed Icobus anyway) to give them no possible attack form.

She turns it into a slug with baleful polymorph – an evil, demonic slug with a boatload of hit points. The slug falls to the ground and oozes away, to one day scare the piss out of a local paladin.

Then it’s all over except for the looting and plot points.

First Session (16 page pdf) – The group bypasses a headless horseman on the way to Caliphas, where vampire murders are investigated. 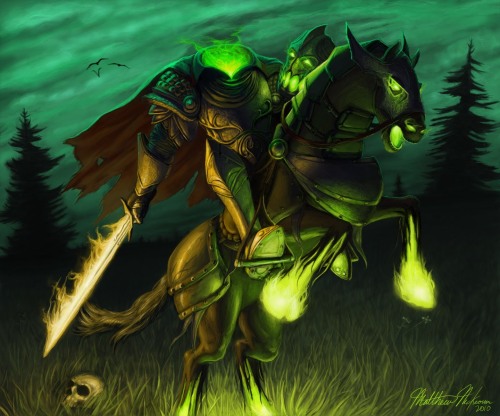 My friend Scott from Memphis was in town, and guest starred as Vampire Hunter D.

Xurak charms the horseman as we fight off hellhounds.  Unfortunately, the intelligent nightmare he’s riding will have none of it…

Just out of pure coincidence, everyone decided to bring a huge helping of donuts or other baked goods for the group this session, so we went into the finale in a carb-fueled frenzy.

First we fight more mi-go, who have a lovely cold projector gun that I get and eventually learn how to use! They also have a large body-mulching machine, which we forgo learning how to use. Then there’s more tentacle-heads. We wipe them while singing the Billy and the Boingers song “Love Rhino.”

And then it’s go time!  We fight a Dark Young of Shub-Niggurath while the Black Goat of the Woods with a Thousand Young herself starts to enter Golarion!  It’s hard fought, details are in the session summary, but we persevere!

We escape the flooding base, go back to town, install the mayor’s brain as ruler pro tempore, and pull the heck out. We take the one sane person we met with us, Laurel Sills the innkeeper. We took such a liking to her that we agreed to stake her to a bar in Caliphas, the vampire town.  (Get it? Stake?  Ha ha ha haaaa!)

On the way there, we meet a Renfield with a wagon containing a vampiress! Somehow, we manage to parley instead of just go on a murder spree, even though I had to leave early…

Fourth Session (13 page pdf) – We fight deep ones, mi-go, gugs, dimensional shamblers, and all the other alien inhabitants of your usual Arkham House short story collection.

Where the human women at?

Besides the fact that Chris and I had just watched Spring Breakers and were besotted with it, such that when we found evidence of ongoing fish-man on human forced breeding programs our main response was to sleazily mutter “Spring… Break…,” this was just hacking our way through the Lovecraft Bestiary 101.  We did appreciate finding all the brain jars and trying to talk to the Mayor’s brain, though.