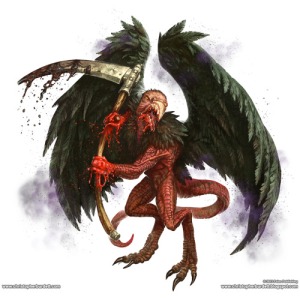 Third Session (7 page pdf) – a Woundwyrm and mythic vrocks decide to challenge our Mythic Bullshit ™ but are thwarted! And we thaw out some new friends.

We prepped heavily for the fight with the Woundwyrm and it ended up being quite mobile and complex. Tsuguri’s aura of madness ability is the real star here, causing the beast to lose several rational moves.

“I know, let’s redeem it!” exclaims Antonius! Before everyone is done with their expressions of shock and horror,  he finishes it a swat from his weapon.

After we kill it we bust out some guys who got turned into statues, and one, Trevor, is Sosiel’s lost brother and has written a long sad letter to him.  We joke about delivering the letter and then trotting his brother out 30 seconds later. He’s pretty buff, so I try flirting with Trevor but to little effect.

Then we go to my Place of Destiny ™ and kill the mythic vrock that engineered the evil ritual that set me on my path to mythic notability.

This was a pretty tactical session but I was punchy so I got in a lot of little quips.