Reavers on the Seas of Fate – Season Four, Thirty-third Session

If you thought the previous session got squirrelly  you might want to skip this one. Things have gotten crazy for our pirates; a good honest shore raid has turned into a real mind-screw as everyone is confronted with what they long for the most. And not the least, the now ravenous Amalinda Staufen, who has apparently been pining away for Sindawe in his absence.  Anyway, as the pirates fight the keep guards – ceustodaemons! 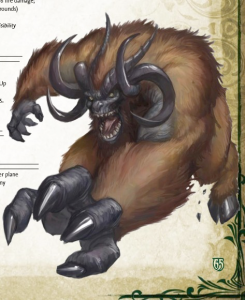 These guys get summoned by the erodaemon and one heads out after the skeleton-crewed Araska while the other joins in the fight. After some hot action the pirates take the keep, but it’s up to the PCs to go confront Amalinda and her friend. In the chapel, they make a gruesome find…

Wogan investigates the bodies. The flesh is sunken to the bone, the faces twisted in agony. The skin is lacquered. Wogan announces, “They were strangled to death.”
Sindawe asks, “Strangled? Or suffocated?”
Wogan points at ligature marks on a corpse, then says, “Literature marks.”
Sindawe stares at the round cleric a moment, “Uh… they got read to death?”
Mitabu offers, “Maybe someone put a heavy book on their necks.”
Sindawe nods at that; it sounds exactly like something Chelish nobles would do. What bastards! 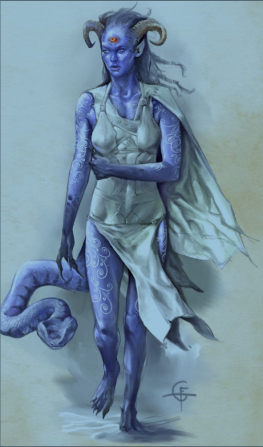 Of course even gruesome finds are rendered funny by the degree of confusion the PCs bring along with them. But humor fails them as they go down into the crypt. Trigger warnings for cannibalism, matricide, baby endangerment, forced matrimony, forced amputation… Not sure if I’m missing anything. Read on.

Of course, the erodaemon (who has been preying on the greatest desires of the PCs, including Serpent’s desire to find his lost mother) skedaddles once the going gets tough. And how is the Teeth of Araska doing with its own daemon attack?  Find out next time!