Reavers on the Seas of Fate, Season Five, Second Session

Second Session (6 page pdf) – “King Xeros of Old Azlant, Part II” – Alien lobster men beset the pirates as they tamper with Things Men Were Not Meant To Know aboard the planar ship King Xeros. But, they end up with a new Rahadoumi friend!

Sorry all, the summer got super busy.  But I’m back with more Reavers goodness, and plan to start posting about more than just the summaries too. 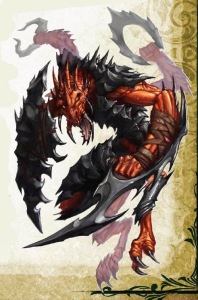 This session had its ups and downs.  This is a Pathfinder Society module called “King Xeros of Old Azlant,” and it’s weird, with a planar-travelling Azlanti crystal ship and xill (lobster men) and more.

Sindawe went in alone, and was good-humored about being paralyzed and stuffed into the ship’s workings. Mitabu tried to mess with the controls, which ended up throwing a disintegrate at Hatshepsut, which would have zorched her if not for an Infamy Point spend.

They they fight off the rest of the xill, which turns out to be quite a challenge, but Samaritha frees the night hag whose soul-energy is currently being used to power the ship (it runs on sentient creatures, of course, because the Azlanti are dicks).

They beat the xill and free some Garundi humans, and then Mitabu goes to fiddle with the controls again.  This ended up in an argument after Samaritha mind controlled him to stop him from disintegrating anyone else.  Ed, Mitabu’s player, was upset about being mind controlled by Samaritha and felt it was railroading that they couldn’t get the planar ship for themselves. He had already been unhappy; Mitabu was built to be pretty ineffective in combat, and I tried to put in opportunities for him to shine but they got sabotaged (like when Serpent swiped his scouting mission on Staufendorf Island).  And his girlfriend Ashley had already left the game. End result, he ended up not returning to the game. Unfortunate, and I could have handled the mind-control differently (in fact, we retconned it right after it happened) but on the other hand, I wanted to be able to put in a side adventure like this without having the campaign turn into Planescape, so IMO you gotta work with the narrative sometimes. But, different strokes.

Then we have some “Alien” style aftereffects (the xill are Alien ripoffs) with some of the survivors, but they catch that early. And it’s off to Azir, also known as Port Godless!