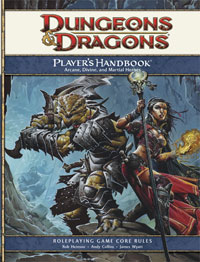 Dungeons & Dragons Fourth Edition has hit stores, but as my readthrough review shows, you probably shouldn’t bother with it (see the “4e PHB Readthrough” posts on this blog for the nitty gritty). It’s a World of Warcraft-inspired tactical combat game, very unlike (and incompatible with) previous editions of D&D.

Many people love to attack the bearer of bad news, so let me be clear about my background. I’m not one of those D&D-haters, or someone who has only played Third Edition and therefore can’t believe anything might be an improvement. I’ve gamed since the early 1980s, starting with Star Frontiers and quickly moving to the D&D Basic set, and happily migrating to AD&D first edition, AD&D second edition, and D&D third edition. Each time, the new version of D&D, with its improved elegance and increased options, easily sold me on being an improvement on the previous version, and I was happy to upgrade! My bookcases still bear the weight of more Second Edition gear than anything else, just because they published the most product ever in that generation – but except for repurposing adventures those books lay fallow after the upgrade. I view players of “1e derivative” products like Castles & Crusades and OSRIC with pity; I enjoyed my First Edition days but I don’t find that I want to go back there.

I’m also not a D&D-only guy – I’ve played everything from Deadlands to Feng Shui to Call of Cthulhu – I have several Cthulhu Master’s tourneys under my belt and have playtest credits in things as farflung as “Wraith: The Great War.” Check out my RPG reviews – they’re pretty widespread. I also can’t be accused of being just a “collector”, I play all the time. So I think I know RPGs in general, and D&D in particular. I don’t have a (previous) bone to pick with WotC. I helped launch 3e as one of the original Living Greyhawk Triads at Gen Con 2000. OK, so enough about my credentials.

4e is the first time I thought of D&D, “Whoa – this isn’t going in the right direction.”