I’m playing a witch in our new Pathfinder Carrion Crown campaign and she is Vudrani. Vudra is basically the “India” analogue in Paizo’s Golarion campaign world. I wanted her to have a much more extensive Indian (Hindu/Buddhist/whatnot) flavor to her. So I’m looking for skinning ideas from you! Her name is Sredni Vashtar’s Girl and she worships her weasel familiar as a god. More details here in a previous post on her background…

My ideas so far include:
1. Using mudras (those funky hand signs) for her hexes. I’m trying to devise a mapping (this one for Misfortune, this one for Fortune, etc.). ideas here very welcome, for some reason the Interwebs are failing me in coming up with good lists of these and their meanings. She’s low level and only has a couple so I’ve been able to fake it so far, but once she has a bunch of them I’d like it to be distinctive to the point where I don’t even have to say which hex I’m using for the GM and other players to know “OK, here comes Slumber…” just from the hand sign.
2. Having a mantra she chants instead of Cackling.
3. Generally considering her weasel one of the thousand gods of Vudra.
4. She describes her manipulation of luck (fortune/misfortune/etc) as dharma and things that affect people like healing as affecting their chakra.

As a sub-theme her weasel is really an evil Nyarlathotep worshipper and so her spells are more “evil great old ones stuff” but her witch powers are more her/her culture/her philosophy based; as she goes on she’ll have conflict between the two.

That’s about all I’ve got… Back in Feng Shui days when it was time to have some Daoist sorcerers I watched a bunch of HK movies to get some cool flash, but I’m not super familiar with the Indian panoply of stuff (and most of the Indian movies on Netflix don’t seem to have religion/ritual/magic/etc as too much of a component…).  I tried going through the Far Eastern sections in my local Half Price Books but though there was a lot of stuff it wasn’t very helpful for these purposes.

Any ideas for sources, ways to skin the witch, etc. along these lines? Doesn’t have to be “true to” the real Hindu/Buddhist stuff, just ripping off the flair. Like how Christian churches are depicted in Japanese anime, where all priests have reflective glasses and silver crosses that shoot energy out, is “authentic enough” for these purposes.

As we’re wrap up our Jade Regent campaign, we’ve decided the next up will be another Pathfinder campaign, Carrion Crown. We’re just addicted to these awesome Paizo Adventure Paths.

Carrion Crown is a gothic horror type AP. I’m always trying to do something different, so on the heels of my samurai from Jade Regent, I’m going to play one of the new APG classes, a witch, and I figure a Vudran girl would be an interesting stretch.

Our GM Paul wants us to provide him with three flashbacks as part of our backgrounds for him to build on as part of the game.  Here’s mine – it’s pretty dark, and I have a fairly complex arc planned for this character.  We’re supposed to be in mist-shrouded Ustalav and know recently deceased Professor Petros Lorrimor, says the Call of Cthulhu-esque setup… So meet my character, Sredni Vashtar’s Girl. You can see her actual character sheets on our Carrion Crown campaign page.

Recollection of Longing in Captivity 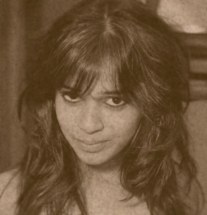 The one known as Sredni Vashtar’s Girl grew up an orphan in a baladata in Niswan, the capital of Jalmeray.  It was a hard childhood and the precociously smart and religious girl was singled out for special abuse and torment by the matron of the orphanage. The years went by slowly.

The girl’s one diversion was that she could see a strangely intelligent weasel from her window; it lived under a stump in the yard.  As she watched it, she became convinced that the weasel was one of the Thousand Gods of Vudra named Sredni Vashtar and she prayed to it for strength.

One day, tired of the abuse, she prayed fervently to Sredni Vashtar for the death of the matron. The matron was working in the yard, went to clear the stump, and was bitten by the weasel. The wound would not stop bleeding and the woman bled to death in front of the shocked children.

That night Sredni Vashtar came to the girl and said that she was his to do with as he might, and that they were to leave Jalmeray and wander the world. In response to her worship and obedience, he would teach her magical secrets that would make her powerful. Eager to escape, she agreed, and was thereafter known only as Sredni Vashtar’s Girl.

Recollection of Travel and Obedience

As an atanapratta she travelled far within and then from the Impossible Kingdoms. As they went from Jalmeray to the dark markets of Katapesh, she learned from wise men and women how to use mudras and mantras to generate mystical effects, and Sredni Vashtar taught her the arcane arts.

She met a handsome young Vudran man while in Katapesh. But Sredni Vashtar did not approve, and forbade her to see him, nipping her hands viciously when she argued. The girl snuck out at night to see they boy anyway, but when she got to the place she was to meet him, he had been killed horribly by some large bat-like creature she saw flying away.

Sredni Vashtar told the girl that she had been punished for her disobedience and that the Haunter of the Dark had taken the boy. He forced the sobbing girl to dispose of the body as her penitence. Thus did Sredni Vashtar’s girl learn an important lesson in obedience. 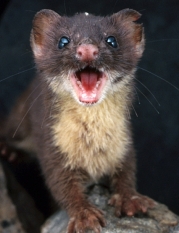 At the indisputable urging of Sredni Vashtar, the girl journeyed into foreign lands far to the north; through Cassomir and up the Sellen River past Kyonin and Razmiran to the River Kingdoms and further north to mist-shrouded Ustalav.

The girl ended up in Karcau with her funds having run out and no idea what to do there, but fate intervened.  Late one evening after the Karcau Opera had let out, a young lady named Kendra Lorrimor was lured into a dark side street by a child asking for help – but this was a trap, leading her into the clutches of some monstrous creature – possibly a vampire, but it was never caught or identified. Sredni Vashtar’s Girl, looking for a place to sleep that night, happened to be in that dark street and surprised the creature and drove it off with magical dancing lights, saving Kendra from its clutches.

As a result Professor Lorrimor, her father, sponsored the odd foreign girl to attend the University of Lepidstadt, where she has been feeding her voracious intellect – while trying to ignore the voracious appetite of Sredni Vashtar to urge her to questionable deeds. She keeps up a correspondence with Kendra, who has been a positive influence on the girl. The girl writes her in an an ancient tongue so that Sredni Vashtar will not know of what they speak.

Sredni Vashtar’s girl has been living the quiet life of a foreign student at the University. The other students believe her to be a sorcerer or wizard and Sredni Vashtar to be her familiar; she allows them that belief at Sredni Vashtar’s urging. He encourages the girl in her learning of all kinds of ancient and occult lore. Now that she has gotten word of Professor Lorrimor’s death, however, she is upset and conflicted. She is saddened at the Professor’s passing and upset at her only friend’s grief; but she can’t help but be worried about her ride to the University disappearing… And into that chaos Sredni Vashtar whispers his strictures.

There’s a lot of discussion about this all over the place. I hesitate to answer, but I would like to shed some light on some of the terminology in use and mention some bits where I think people may be being unclear.

According to the old Threefold Model, which is a seminal attempt at theoretically classifying approaches to roleplaying, there are three (natch): Gamism, Simulationism (or Immersion), and Dramatism (or Narrativism).  Usually people don’t come purely from one approach or the other but some mix of them, although you usually see consistent leanings into one of the three approaches.  Would you like to know more?

“Gamist” usually means a focus on playing the game for the rules, with clear challenges and victory conditions and metagame goals. Often in games this means combat, but skill and interaction events are also gamist if pursued with a “rules first” mentality. Some people like the gamist approach. Gamism is what people are complaining about when they say “D&D 4e plays like Magic/RoboRally/a board game/a tactical minis game/etc.” Gamists like to “do what will win.” People don’t use the old terms “munchkin” or “powergamer” much any more, but they were deprecating ways of referring to gamists, since they worried about their character’s build or loot more than a realistic in-game motivation.

“Simulationist” usually means a focus on “becoming” the character inside a realistic game world. RPGers like to use the big word “versimilitude,” which means “Yes I know magic isn’t ‘realistic,’ but the game world can still behave realistically according to its own rules from its inhabitants’ point of view.” Simulationists like to “do what their character would do.” Metagaming, or making decisions about what the character does using information not obvious to the character, is heavily frowned upon. D&D was extremely simulationist (with a side plate of gamist) up through 3e; a lot of the reaction to 4e is its movement in the other directions.