Reavers on the Seas of Fate – Season Three, Fourteenth Session

Fourteenth Session (9 page pdf) – “Civil War” – The crew sponsors a coup of the cultist leadership and organizes a battle with most factions of the island mobilized against each other. Meanwhile they plan to kill the village priest and get the Lens control item.  They can handle two CR 12′s and some trash mobs right?

First – more planning! They negotiate with the Fertile Families and go get the crazy hermit and his killbot (turns out he’s the priest’s disenfranchised brother) into the fray.

They start the battle by luring the death ray away; as it returns Wogan casts a Lunar Veil spell that Saeng Ki gave them in the Rain Tiger, which I let work like a solar eclipse. The mass combat was a big barrel of pain, especially as whenever a cultist was defeated, a firey blob came out of them to join the fight itself. Olibrax the priest was high level, and he brought out his ace in the hole, left here deliberately to guard the Flame control – a Shining Child.

Remember our heroes are still sixth level. But it doesn’t have time for a symbol of insanity and a scintillating pattern would mainly mess up all the various mook troops around, so it scorching rays the heck out of them, nearly killing Samaritha. Every round is a whole load of pain for them. But they pull it out with an alley-oop – Serpent kills the priest and Sindawe passes the Flame control headgear to Xiola, and then Wogan drops the eclipse and Xiola burns the Shining Child to death with the Flame of Guidance! That reminded me of the anime Bastard! where the hero burns fire so hot that it fries an efreet… The Flame actually does half fire and half plasma damage so even flame critters get burned! 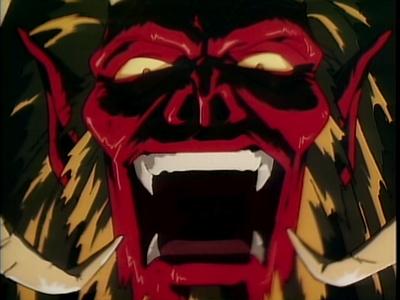 There’s still a bunch of cultists, but this is enough to call for surrender… Next time!

5 responses to “Reavers on the Seas of Fate – Season Three, Fourteenth Session”