Reavers on the Seas of Fate – Season Four, Second Session 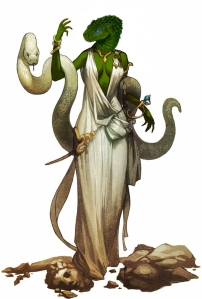 Second Session (18 page pdf) – “A Birth and a Death in Riddleport” – Samaritha finally comes to term serpentfolk style and the crew entertain themselves by fighting in Zincher’s arena, but then they find one of their long-time crewmates murdered!

That’s right – Samaritha, Serpent’s wife, who got pregnant back at the end of Season Two, finally gives birth!  Well… Lays an egg, really, she is a serpentfolk. I think Golarion serpentfolk are supposed to do live birth but I’ve admixed the Freeport serpentfolk in instead and they definitely do the egg thing. Quite the milestone! So the first half of the session basically revolves around that. I’m really happy our campaign is in-character roleplay enough that a PC getting married and having a baby is absorbing for all the players.

And how better to celebrate than violence. But it’s not even the PCs’ violence! No, instead they get to watch Mase and Gareb, two of their crewmen, fight fish-men in the arena. They lose, but live through it.

Then they hatch a “clever” plan to hand off their captive Ulfen to the orcs, so that they don’t garner White Estrid’s revenge should she track them down. They wisely decide not to provoke the monkey that comes along for the ride – last time they provoked a monkey in Riddleport someone came close to losing a nose. Word to the wise. (It’s kinda like Costa Rica in that way.)

And then – beloved crewman and second mate Little Mike’s body is found on the streets of Riddleport. BAM! Downbeat and cliffhanger for next time.