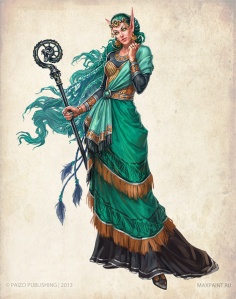 Fifth Session (11 page pdf) – After a brief regrouping, we head out to the Ivory Labyrinth where we fight Jerribeth, a fetching looking mythic glabrezu demon, and send her down the dark road to the black mountain from which none ever return. Then we come face to… something squirmy with the worm-man sorcerer Xanthir Vang and, one can only assume, his magical pan flute!

First, though, Trystan convinces Arushalae to give him her magical bow as, you know, part of her repentance. This gives Antonius a very, very poor impression of Trystan. Avarice is non-good in general but Irori teaches separation from all earthly entanglements, so this is double grody to him. If this were a real good story, people’s sins would get used against them at some point during the AP but I’m sure that won’t happen.  It would be boss though.

We get to the Ivory Sanctum and find Jerribeth, who looks fair but is really just a glabrezu.  I grapple her anyway, which hurts a lot but I’m trying to become the ultimate mythic grapple monster so it’s good practice. It doesn’t stop her attacks but it sure stops her spells. I repeat my mocking schtick about “redeeming everyone!” when we defeat Jerribeth…

“OK, now let’s lead her on the road to redemption!” he declares, pausing long enough to see the horrified expressions on his comrades’ faces before snapping the demon’s neck.

Then we kick in a lot of buffs and just rampage through the complex. “Don’t stop to loot – there’s more kill to be had!” we cry as we sprint past our downed foes to the next room. We only halt once we get to Ol’ Wormy himself… Next time!