Reavers on the Seas of Fate – Season Four, Twenty-third Session

Twenty-third Session (8 page pdf) – “On The Road Again” – The Teeth of Araska and Wandering Dagger take to the sea lanes to raid Chelaxian shipping! They take a prize, but are harried by fish-men. 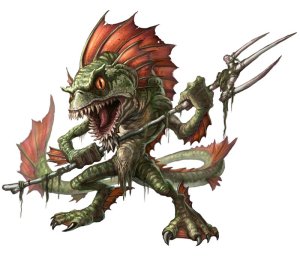 The guys like the wavecrawling aspect of the campaign – taking a break from “plot” and just going out and pirating. And sometimes the tables are turned, like when they get attacked by some fish-men at night… The NPC pirates on guard (which I let the players run) are more than up to the challenge of running them off, however.

Samaritha gets tired of the pirates calling them fish men and says, “They are called sahuagin!”
This news upsets Pirro. “What? Why can’t we call them fish men?”
Samaritha explains, “There are over a dozen fish man races.” She goes into great detail about the differences between them.
Pirro replies, “What? What is the government doing about all these aquatic monsters!?!”

I try to bring my knowledge of realistic naval stuff to the table for the rest of the session – two allied ships hunting for merchants, there’s a lot of details about keeping each other in sight, who sees what other ships, primary claim to the booty coming from whoever boarded first, etc. They take the Dowager Queen and get some booty and a defecting Chelish marine, Luca Caletti, who is soon referred to as “Spaghetti” by the not-so-fond-of-Chelaxians crew.