Reavers on the Seas of Fate – Season Four, Twenty-fourth Session 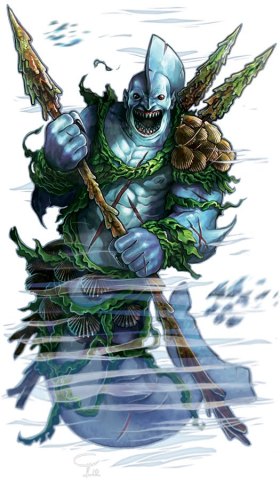 Twenty-fourth Session (6 page pdf) – “It Was Nice While It Lasted” – The pirates ply the sea lanes, until a derelict ship is revealed to be a Chelish trap!

We have more wavecrawling action – the Wandering Dagger takes a ship out of sight of the Teeth of Araska, which means they don’t have to share!  And then man-sharks attack the ship.  I’m ambivalent about these nuisance sea humanoid attacks; trying to attack up onto an elevated, bobbing ship seems… Unlikely. These guys just wanted to drag off someone to eat at least.  The PCs fight them off and get a couple spears with paralyzing toxin on them.  “Can we keep some?” they ask?  “Sure,” I say, with a devious grin.

After the first crewman is paralyzed “accidentally” by a man-shark harpoon, Captain Sindawe has the lot thrown overboard.

A pirate ship is much like a frat house with even more violence.

And then… a Chelish trap!  The PCs are lured onto a derelict ship with a bound hellcat on board, which is bad, but even worse is that while they’re still over there a fully armed Chelish warship appears from behind a veil with a full Hellknight on board and demands the two pirate ships surrender!