Reavers on the Seas of Fate, Season Five, Fourteenth Session 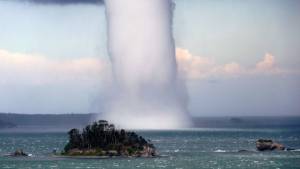 Fourteenth Session (9 page pdf) – “Escape the Eye” – The shore team returns to the Araska, counts their loot, and sets their course for the Shackles. But a giant waterspout intervenes.

It’s just some giant lizard fighting and then they get back to the Araska with their prize.  But navigating the Eye of Abendego is no picnic, another waterspout bangs up the Araska.  I keep rolling hot on the random weather table.

Then they pass the Bloody Vengeance on its way to the Green Blood on Black Rock local monster fighting festivities! They seem interested so I’ll have more on that next time.

But then, another random weather roll…  How many 00’s can one set of dice hold?  It’s the largest waterspout possible, F5 style. Eek!

Reavers on the Seas of Fate, Season Five, Thirteenth Session

Thirteenth Session (12 page pdf) – “The Key To War Machine, Part III” – An epic fight with juju zombies and a Wendifa (female witch doctor) has lasting effects as they scour the tomb for the amulet of the Terraken.

More dungeoneering, and then a fight with a Juju oracle! Voodoo all over the place; juju zombies, she zombifies and mind-controls party members.  Fun!  They even leave her alive… Kinda.

Reavers on the Seas of Fate, Season Five, Twelfth Session

War Machine, Part II” – Cannibals apparently infest the crypt, which in addition to normal crypt dangers keeps the pirates on their toes – and losing some, to the grinding bear traps all over the area.

It’s all sodden dungeon crawling with cannibals this session!  Still using “Tomb of the Necrophage” from Tombs of Golarion.

Reavers on the Seas of Fate, Season Five, Eleventh Session 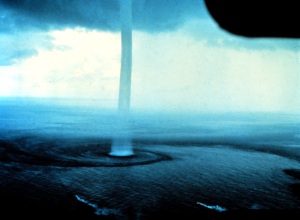 Eleventh Session (10 page pdf) – “The Key To War Machine, Part I” – The pirates brave the Sodden Lands to find the control key to the superweapon. A shore party descends into a boggy crypt…

First, the ship has to deal with the issue of Serpent’s wife Samaritha being lost overboard in the Eye of Abendego. With clever use of spells and some sharp sailing they find her and are effecting a rescue, when my next random Eye of Abendego weather conditions roll comes up double zero.

The entire crew is lining the port rail, intent on watching the rescue. From the other railing, Wekk the Cloven screams, “Great Gozreh’s cock!” As everyone whirls, they see him pointing at a waterspout forming to the north. (A waterspout is a tornado over water, for you landlubbers.)

The next bit is the PCs desperately trying to keep their ship together as the waterspout hits – my ship rules turn this into a pretty epic and interesting “combat.” Serpent keeps leaping overboard to save people, which in hurricane-racked seas would be suicide if he wasn’t all optimized with a Swim speed and everything.

Finally they get to the Sodden Lands and go ashore. They’re searching a ruined Chelaxian plantation for the control doohickey for the war machine Mase Venjum promised them. This bit is taken from Tomb of the Necrophage from Tombs of Golarion. In the first part they mainly just fight angry juju zombies; apparently someone’s gotten here before them.

Reavers on the Seas of Fate, Season Five, Tenth Session 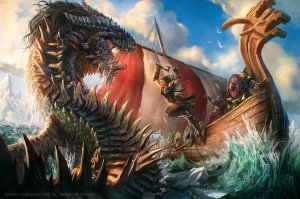 Tenth Session (11 page pdf) – “The Eye of the Storm” – The pirates take on a skald and set off through the Eye of Abendego, which tests their mettle as sailors harshly – and Samaritha is lost overboard when a waterspout hits!

So first they come across a weird sight – an Ulfen longship!  This far south? They decide to parley instead of fight (probably a good idea, as the ship is the Kraken’s Spite from Ships of the Inner Sea, and the crew is pretty stout). They just want to get rid of a skald that needs to go further south.  Why?  Well apparently Ulfen Linnorm King White Estrid sacked Nisroch and sent skalds in all four compass directions to spread the word of her feat!  And those of you who’ve been with us a while remember that the PCs were there when her fleet attacked…

I hadn’t yet determined what happened in the Estrid vs Nisroch battle, and decided to leave it up to the dice, and dependent on the fight between White Estrid’s ice linnorm thrall Boiltongue and the ancient umbral dragon the Nidalese had put in place after her first raid for such an eventuality.  So between sessions I rolled out a fight between the two and – OK I’m such a nerd – composed a skald poem to relate it to the PCs.  The fight took a long time. Here it is, The Battle of the Two Dragons in its entirety, related by the skald Maar Eiderson.

As the fleets of the Northmen reaved into Nisroch harbor
Estrid’s Pet wreaked destruction on the darkling city
When an ebon tower rove asunder and a great shadow wyrm arose
The two huge beasts circled each other and darkened the ground
Boiltongue spoke first and his maw sprayed ice across the blackness
The other replied in a cacophony of shadow that drained the icy one’s might
But then the ice hardened and it fell like a mountain to earth
The crash was felt throughout the bay
As darkling buildings were crushed to gravel
But Boiltongue raged aloft, blinded by the shades
As the dark one tried to free itself from the frost
The linnorm’s vision cleared, and he followed the shade to ground
And snapped at its flitting flanks, as it shook free of the encircling ice
The dark dragon’s eyes blazed as it uttered a dark word of destruction
That caused the bravest men’s hearts to quake
But Boiltongue the linnorm is beyond such magics
And continued to press his attack unslaked
The shadow wyrm pulled together the shadows to encircle him
But Boiltongue struck unerringly through the darkness
The shade spoke again and shadows spilled out, covering the wyrm of ice
Whose claws and fangs lashed out but could not find purchase
The shade took to the air with frightening speed
Its wings blew building walls down, like a storm from the north
As men and darklings fought and died around
But Boiltongue followed it into the twilight sky
The shadow wyrm called upon its dark magic and became faster still
Like a shadow flits across a wall, it darted by Boiltongue and each
time opened a rent
In the great linnorm’s side. But the linnorm’s wounds knit
Almost as speedily as they opened; and he bode his time
And iced its wings again as it approached
The shade fell into the bay, and the wave it made as it smote the water
Raised up boats a dozen feet; the ice wyrm followed right after
But the shade broke free of the ice and turned his full fury onto Boiltongue
Ripping into the linnorm with fangs and claws and pinions again and again
Till Boiltongue’s blood stained the dark waters oil-black
The linnorm coiled around the dragon and dragged it down into the icy waters
It burst free and shot out of the waters into the darkened sky
And circled enraged looking for its opponent
But Boiltongue lurked below, the icy waters knitting his wounds
The shadow wyrm descended on a longship, and shadows vomited from its maw
Draining the life from a dozen Ulfen warriors
Boiltongue surfaced by Estrid’s flagship and the king saw he was weakened
By the shadow wyrm’s foul darkness
She ordered her war-priest to restore his strength and enchant his fangs
That they might find purchase on his ghostly foe
And the Lord in Iron’s blessing was given unto the linnorm
The umbral dragon’s fiery eyes espied this and he spoke his word of
destruction against the priest
Whose ears bled, and quaked in agony
Boiltongue surged from the waters to answer this offense
And the dark one eagerly met him
Determined to rip him asunder once and for all
Boiltongue’s fangs sank into the shade in turn
And their serpentine bodies coiled about each other in a death-knot
The shadowy one broke free of Boiltongue’s embrace and shot away
Boiltongue coiled up into the sky proudly awaiting its charge
It paused, muttering draconic magic, and then advanced
But turned aside, hurtling down towards Estrid’s ship
The linnorm ignored this, and charged and struck at air
Whence the real dragon commanded its shadowy double
Taken aback, it again breathed out its shadows on the linnorm
But prepared for its tricks, Boiltongue was barely affected
And his mighty jaws crunched down on the shade’s neck
It roared as the linnorm’s feared venom, the black blood of the earth
Flowed into its veins. In a frenzy it tore into Boiltongue
As Boiltongue replied fang for fang
But the shadow dragon’s pinion struck to the heart of the great linnorm
And this time it was Boiltongue that fell from the heavens
Into the icy heart of the bay; the dragon roared in triumph and followed
Him down to finish off his victim; but in the chaos of the spray
He missed the linnorm’s throat with his claws
And Boiltongue, his wounds healing, lashed from the waves
And raked his foe with poisoned fang; the umbral one raged
And slashed and battered his wounded foe into icy hunks of flesh
Then tried to rise, but the venom in its blood found
Its dark heart, and it fell again into the waters
And sank into the depths alongside the linnorm.
Men on both sides shrank from the fray
To see such destruction wrought by the massive titans
Upon each others’ colossal frames
Ice and shadow unleashing their might
To finally take each other in their death-spasms
But the linnorm is no mere beast
He is a part of the arctic primeval
Even as the battle between Ulfen and darklings swelled
His corpse began to come together
And knit itself back into its ancient shape
Ice gripped the hearts of the Nidalese scum
As Boiltongue rose again from the waves
The umbral scourge defeated
He devoured its dark heart And his roar was like the north wind
And the howl of the wendigo in winter
The defenders quailed and fled from the fight
And thus did the men of Halgrim, led by White Estrid the Linnorm King
Sack Nisroch again. 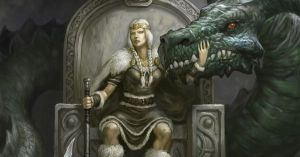 Both of them had DR and SR and high saves so the fight went many rounds. The umbral dragon had the linnorm generally outclassed, but its regeneration (and a little help from the Ulfen) kept it in the fight long enough to finally get its poison to proc, and once that happens it’s a short trip.

Well roused by the recitation, the Teeth of Araska sails into the permanent hurricane the Eye of Abendego… The storms batter the ship, and they manage to keep control but Samaritha is washed overboard!  Fly doesn’t do the trick when the ship’s flying before a gale wind…