Third Session (12 page pdf) – We continue to kill already-dead emperors in the Well of Demons.  They’re livelier than you’d think. There’s devils and demons and daemons and whatever else they could think of.  And then we fight Lo Pan!

First, after a conversation with the totally worthless kami who guards the holy waters (his main superpower appears to be “tastes good in butter”), we go back into the rift and fight stuff.  First up are giant spellcasting boggards!  Or hydrodaemons, as it turns out. With summoned water elementals and spell-likes and them being in the water it takes a really long time. Then, an undead samurai. And a nightwing. And a lich. Finally we get the dead Emperor’s body and finish up this big ol’ vision quest! And level to 13.

Not too much else to tell about this one – we basically grinded the heck out of a bunch of high-CR baddies!

Second Session (16 page pdf) – It’s down into the demon rift under the Shrine Island for us. We don’t mind the normal Type III  and IV demons so much but when I spend half a combat in a demon’s vajayjay – that’s a little extreme.

My character Yoshihiro meets a good angel type ancestor of his – but discovers he has to kill a weird twisted one.  Check out this puppy: 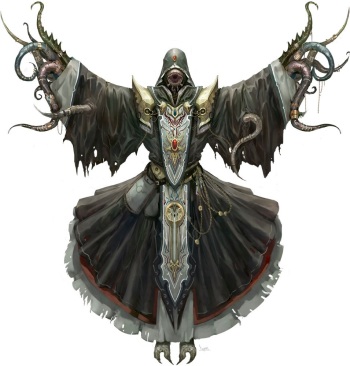 The Gylou, or Handmaiden Devil – but the name on the image is “Venedaemon.” She pulls you up into her… “Tentacle cage” in her nether regions. Guess where I end up.

We headed down into the Well of Demons and every encounter there was hardcore.  They mixed demons and devils and daemons and undead and whatever they could think of that was high CR. We cut our way through erinyes and a masked devil before we get tentacle girl.  Luckily my buddies killed her fast when she “enveloped” me.

Then we had a funny time with the fish-men.  They were sitting there talking about “killing that Commie.”  It took us a minute of scratching our heads to realize that they meant kami, a Japanese nature spirit. We determined they were “Republicans” and tried to negotiate with them, but with a large group someone or other is going to initiate combat within a round of contact, so we just kill them too.

These combats are a big game of rocket tag.  I can’t take a big boss down in one round but pretty much can in two.  So a lot of the time I run up, hit them once and hurt them, they full attack me for most of my hit points, then I hit them for all their hit points. I really don’t like the damage inflation in Pathfinder and 3.5e in general. These critters had enough weird abilities that it was a little more interesting, but even so, a lot of it is exchange of “here’s 100 points of damage, enjoy!”