Reavers on the Seas of Fate – Season Four, Twenty-seventh Session

Twenty-seventh Session (10 page pdf) – “Jailhouse Rock” – Their investigation of the abandoned prison site uncovers some oddities, like the forgetfulness the sole survivor shows. They head out to investigate the mine sites, but run afoul of the local wildlife.

The PCs spend most of the time investigating the abandoned penal colony. They even call on Melella the druid to talk to the local chickens, with Far Side-esque results.

Melella says, “Captain, I arguably have information for you. I’ve been talking to the chickens. They keep saying that the day of deliverance has come. The blue men came and took away the oppressors. Power to the chickens.”

Sindawe nods, “OK. That might help. Return to the ship and tell them I want the docks, the path to the fort, and any other likely areas well-lit for tonight. Double guards. Blast first, ask questions later.”

Tommy asks, “Do you want us to blast that stone building that’s locked up tight?”

Sindawe replies, “In the morning. Maybe. We’re going to keep looking around.”

“Permission to eat the chickens, sir?”

They then start investigating the nearby mining sites, and encounter an aurumvorax.  This is very nearly fatal for Sindawe. “I’ll take care of this critter OH GOD!!!!”  Anyone who knows the aurumvorax from previous editions will be unsurprised by this; for a gold-covered eight-legged wolverine thing it’s super killy. It turns into one of those gruesome “keep pumping healing into the guy who’s being rent apart again and again” fights. 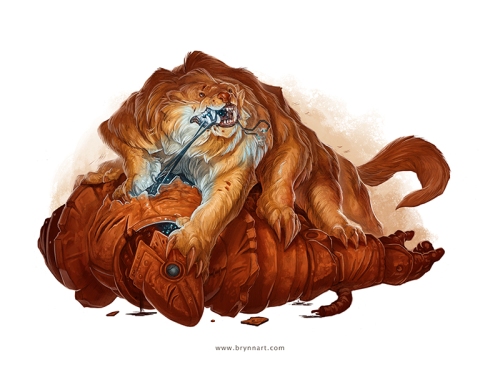