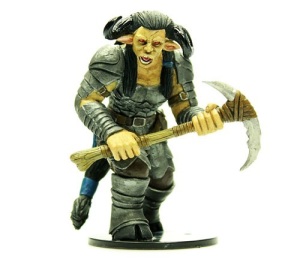 Sixth Session (10 page pdf) – We murder our way through the naughtiness mines till we come across Baphomet’s daughter. Then we murder her.  Then Nocticula murders Baphomet.  Then we go shopping.

First up is killing a tentacle monster like they have here. Then horned demons.  And a glabrezu. And succubi.  We just sing the demon-killing song as we kill them (any Megadeth song). And our war cry of “No Witnesses!” echoes off the walls of the demonic mines.

Finally we fight Hepzamirah, a Nephilim sired by Baphomet. With liberal doses of Mythic Bullshit we kill her. Baphomet tries to give us some stick but Nocticula is all like nuh-uh and melts him and gets us out of there and delivers us back to Queen Galfrey and it’s the end of the chapter.

And Nocticula still didn’t try to kill us or sex us up… I’m very disappointed. (Mainly because my character is gay and I wanted to come up with some snappy zinger when she tried to vamp on me.) 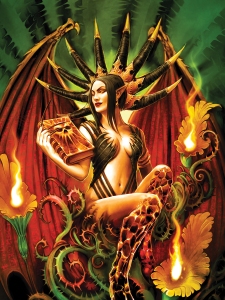 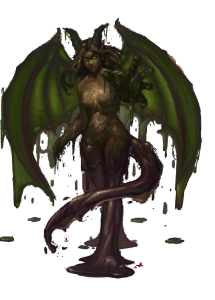 Fifth Session (11 page pdf) – We explore an island in the Abyss and name its land features after Queen Galfrey in proper British explorer style. Then we meet a sexy slime demon and kill a dragon for its lewt.

The river we were heading up on this Abyssal island was called the Nameless River. Ever one to bring order to chaos, that inspired me/my character to name it the Purifying River of Queen Galfrey. I was somewhat disappointed that didn’t cause an earthquake or something. So I named all subsequent features from their stupid demon names to nice things in the name of the Queen!

Have I mentioned how powerful we have become? Only 11th level but 6 mythic tiers and a bunch of god-given knick-knacks.  When a green dragon that attacked last time turned up again this time, we just beat it unconscious and gave it a scrub-bath and left it lying there with a ribbon around its neck. It’s those little touches beyond just killing things that clearly states “leave them the FUCK alone” to random demon Abyssal residents.

Calanthe just uses her combat actions to use her rod of wonder now rather than cast useful spells.  We’re OK with that.

Calanthe fires the rod of wonder at the left-hand barbican. Loud laughter erupts from the walls of the tower, drowning out all other sounds in the area. Antonius streaks over to the laughing tower. He leaps from the carpet of flying screaming, “Who’s laughing now?”

One of the tieflings screams, “Not me! That would be rude!” His politeness doesn’t save him – Antonius strikes him four times, sending him on the burning path to the eternal forge from which none can ever gain surcease. Then he turns to the other demoniac tiefling and crushes him, flinging his broken body over the burning precipice into the shadowed darkness of the pit down which the lost shall fall forever.

As that effect is permanent, this place is thence called “The Laughing Gate.” Then to “Galfrey Falls.” Then a slime demoness invites us to steal a dragon’s treasure – we are all on board with that plan! Even if she is some refugee from Internet fetish art.

What can  you bring the demon queen that has everything? Well, we’re not rich enough to get her something that would impress, so we decide to bring her a key ally of another demon lord. We pay off a demon to narc her out, find her cave, and beat her up. Turns out Baphomet was mad at her and had cursed her bad so it wasn’t all that hard.

Then we get an audience with Nocticula! She gives us info and treats and doesn’t even make us perform sex acts on fly-headed demons (not really sure why not…).

Next thing we know we’re headed to an Abyssal island formed from the corpse of the demon lord of jungles, poisoned water, and dragons. “I wonder what we’ll find there,” said no one… 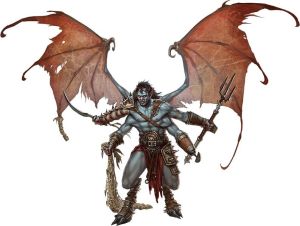 Third Session (11 page pdf) – To make an impression, we take on Lucha Libre character aliases and go to the local arena and murder our way up the gladiator list till everyone leaves us alone. And then we go to a house party!

So we’re in Alushinyrra in the Abyss and want to gain Nocticula’s attention.  Usually that would call for sex and torture and assassination but we’re all paladin types so we go to the arena to kill demons instead.

We take on stage names and costumes for the event!

It goes well, we only have to kill a couple trash mobs before Gelderfang, an incubus with a pizza cutter hand, comes for us.

Shawanda “The Brick” runs up and cuts chunks off Gelderfang, pleasing the crowd and leaving Gelderfang looking horribly maimed. Oh Gelderfang, he’s not pretty no more!

Trystan “The Elf With No Name” shoots Gelderfang again, skewering him. Calanthe “Stripperella” flies in again and strikes Gelderfang with both blindness (which Gelderfang resists) and the rod of wonder (which causes dance music to start playing).

Antonius invokes his titan’s stance and grows to large size and starts dancing to the throbbing techno beat. He crushes Gelderfang’s skull and extracts his brain as the crowd roars its approval. “Mind Freak!!!!” he shrieks in his best mind flayer/Cobra Commander voice. The characters are swarmed with enthusiastic folks of all descriptions from the audience.

Afterwards, we find a night hag selling magic items from the Magic Item Compendium because D&D 3.5e is still holding on in the Abyss.

Then I left before the rest of the group went to win the favor of a succubus lord – when asked what they would do to entertain her, the answer was “Extreme political satire!” But since everyone in the group rolls huge on any skill check you care to name, it all worked out fine in the end. 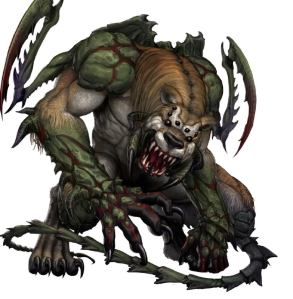 Second Session (13 page pdf) – We go to the Abyss and murder our way up the wandering monster chart till everyone leaves us alone. And then we go to the big city!

This session is a lot of fights.  We fight to close the gate to the Abyss (with us on the Abyss side) and then we fight random demon attack after random demon attack until finally we kill a shemhazian – a 35 foot tall 12 ton killing machine.  We set its decapitated head upon the battlements of our magical fortress – and the random encounters suddenly stop. Mission accomplished.

Then we go into a big demon city with a clever disguise!

As the characters look around like rubes, a thanadaemon steps in front of them. “Are you escaped prisoners? Do not lie, I will know it!”

Calanthe answers, “We are not. We are here for our own reasons. I am a succubus and this is my cult. And I am shopping for shoes.”

“Would you like me to serve as your guide? I would be happy to do so in exchange for a soul.”

“If you reconsider, please call for me first. My name is Xugunfarishandoon.”

Xugunfarishandoon gets back into its boat and paddles away. 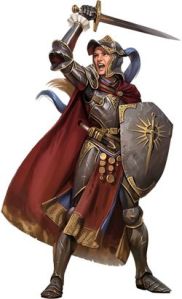 First Session (12 page pdf) – We pick up Queen Galfrey of Mendev and roll out to the Midnight Fane to stop their mythic-demon-elixir naughtiness.

It’s the beginning of a new chapter.  In a surprise move, Queen Galfrey of Mendev wants to come with us into the Abyss.  “OK, I reckon,” we say, and she settles down into the usual quiet and mostly-useless NPC role that all party NPCs do. Weird.

We go to the Midnight Fane, and manage to restrain ourselves from killing long enough to be escorted to the local boss.  It’s a big fight, but it turns out most of it was with a projected image from some eyeless minotaur chick that teleports away.

Then we go find a snake lady and engage in witty repartee.

Antonius tells her, “Mutasafet sent us. He says, ‘Blaaaggh!’ And do you know anything about the ecology of ash giants?”

The serpent-woman responds, “While would be very interesting to have a long conversation with you about ash giants, I think I shall have that conversation after you are dead. I have promised my mistress Areelu Vorlesh that I shall defend the Rift at all costs!”

Antonius offers, “You better simmer down or we’re going to dimensional anchor your snaky ass and murderhobo you.”

She does not simmer down, so we do.